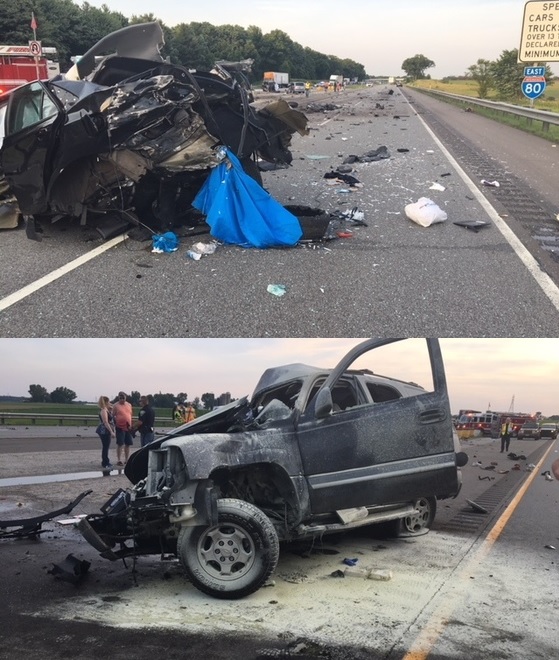 (6-18-18)  St. Joseph County-A four vehicle crash at the 84 mile marker on the Indiana Toll Road began with a call of an erratic driver.

Around 7:26 p.m. on June 17, 2018, Indiana State Troopers were responding to a call about a dark gray or black Toyota that was reported to be driving erratically eastbound near the 83 mile marker.  A short time later the Toyota purportedly turned around in the area of the 88 mile marker and began to drive westbound in the eastbound lanes.

At approximately 7:32 p.m. reports were received by Indiana State Police Dispatch of a crash involving multiple vehicles at the 84 mile marker eastbound.  This is approximately one mile east of the Mishawaka exit.

Preliminary investigation by Trooper Aaron Price shows that the Toyota, reported to be driving the wrong way, was travelling westbound in the eastbound passing lane when it collided with a Black 2004 Chevrolet Tahoe driven by, Octavius Rice, age 46 of Painesville, OH.  The Toyota then collided with a silver 2015 Kenworth, driven by Ivan Radov, age 30 of Berrien Springs, MI, that was travelling in the right lane.  A silver 2012 Chevrolet Malibu that was also driving eastbound swerved to the left to avoid the initial crash and lost control.  The Malibu went through the center median, hitting crash barrels, before coming to a final rest in the westbound passing lane.  The Malibu was driven by, Jasmine White, age 26 of Bowling Green, OH.  White was transported to the hospital with non-life-threatening injuries.

After being hit head-on by the Toyota, the Chevrolet Tahoe came to rest in the center median and reportedly was on its right side until rolled over by motorists that had stopped.  Motorists and responding troopers used fire extinguishers to put out a fire in the engine of the Tahoe.  The front seat passenger of the Tahoe, identified as Denita Rice, age 42 of Painesville, OH, was pronounced deceased at the scene.  One year old Bryson Rice was also pronounced deceased at the scene.  Twelve year old Makayla Lanier, of Painesville, OH, was taken to Memorial Hospital where she later died from her injuries.  Nila Watkins, age 10 of Painesville, OH, was taken to Memorial Hospital and later flown to Riley’s Children’s Hospital with serious injuries.  Octavius Rice was taken to Memorial Hospital with serious injuries.

Radov did not suffer any injuries.

Alcohol is suspected as a factor in this crash.

Family of the deceased have been notified.

This is an ongoing investigation.