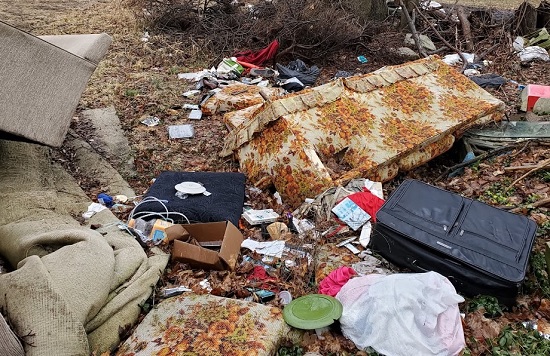 (3-21-19) The City of Benton Harbor has declared war on the massive amount of trash, tires, and debris that are being dumped illegally throughout the city. There are piles of illegally dumped rubbish and debris literally throughout the entire city from the northside to the southside. Illegal dumpers have been dumping trash and tires in alleys, on the side of roads, on vacant lots, and even in the back of people’s homes. The volume of trash, debris and tires throughout the city is staggering. The city has spent over $169,487 over the course of three and a half years on extra dumpsters to remove illegally dumped trash.

The Public Safety Department has begun an investigation into illegal dumping. Since the effort was launched last week, 4 arrests have been made so far. The Michigan Department of Environmental Quality will be assisting in the investigation. The City will be looking at beefing up the current trash and rubbish ordinance with increased fines, adding the cost of remediation and possible vehicle seizure for person’s caught in the act of dumping.

We are asking for citizen’s help in detecting and prosecuting persons responsible for polluting our city with illegal trash and rubbish. We need the residents to help stop illegal dumping in our community.