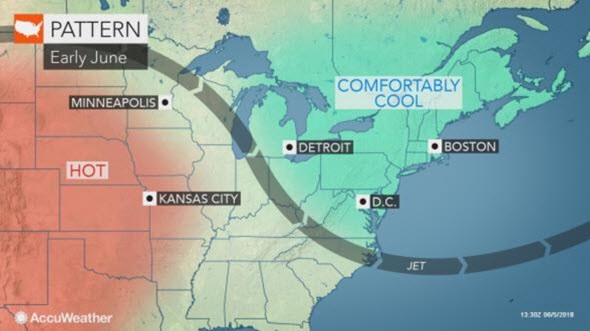 AccuWeather Global Weather Center — June 06, 2018  —  AccuWeather Reports more rounds of cool air and occasional showers are in store for the northeastern United States ahead of a surge of warmth around the middle of June.

While cool weather fans may revel at the pattern, hot weather enthusiasts may be reaching for blankets and long sleeves over the next week or so.

The jet stream is forecast to dip across the Northeast until nearly the end of next week. This will cause cool days to far outnumber warm ones.

“The overall pattern up until around June 13-15 will favor a northwesterly flow aloft which should send multiple weak storms through the region with chilly air in their wake.”

The vast majority of the time will be free of rain, and when it does rain, it will be more of a nuisance with sporadic showers and a locally heavy thunderstorm.

An exception to the unremarkable rain may be a storm during this weekend. Depending on the exact track of that storm, a thorough soaking may occur from the Great Lakes to the mid-Atlantic. Dry air may salvage the latter part of the weekend over the upper mid-Atlantic, but not before making for a soggy day at the 150th Annual Belmont Stakes. The dry air could keep rain away from central and northern New England.

There will be some brief warm days in the mix prior to any storms that arrive.

The warmest part of the period is likely to be Friday to Saturday of this week, when highs will be well into the 70s to the lower 80s F from Detroit to New York City and well into the 80s over the Ohio Valley and lower mid-Atlantic corridor.

During the middle of this week and the early to middle part of next week, temperatures no higher than average are likely. Highs will generally range from the middle 60s to near 70 at Sault Ste. Marie, Michigan, and Boston to the upper 70s to the lower 80s in Pittsburgh and Washington, D.C.

Lows will be mainly in the 40s and 50s across the northern tier to the 50s to lower 60s across the Ohio Valley and lower mid-Atlantic coast.

Toward the middle of the month, the jet stream is likely to retreat northward, and the pattern will come to an end.

“For at least a few days during the third week of June, we expect warm and more humid conditions to build from the Midwest to the Northeast.”

Temperatures are likely to average 10 degrees above normal during the middle of the month.

Hot weather enthusiasts will have to hold out until the middle of the month for a multiple-day stretch where highs will be well into the 80s to near 90.

It is possible that cool weather may fight back over the Great Lakes and much of the Northeast late during the third or early in the fourth week of the month, Pastelok stated.